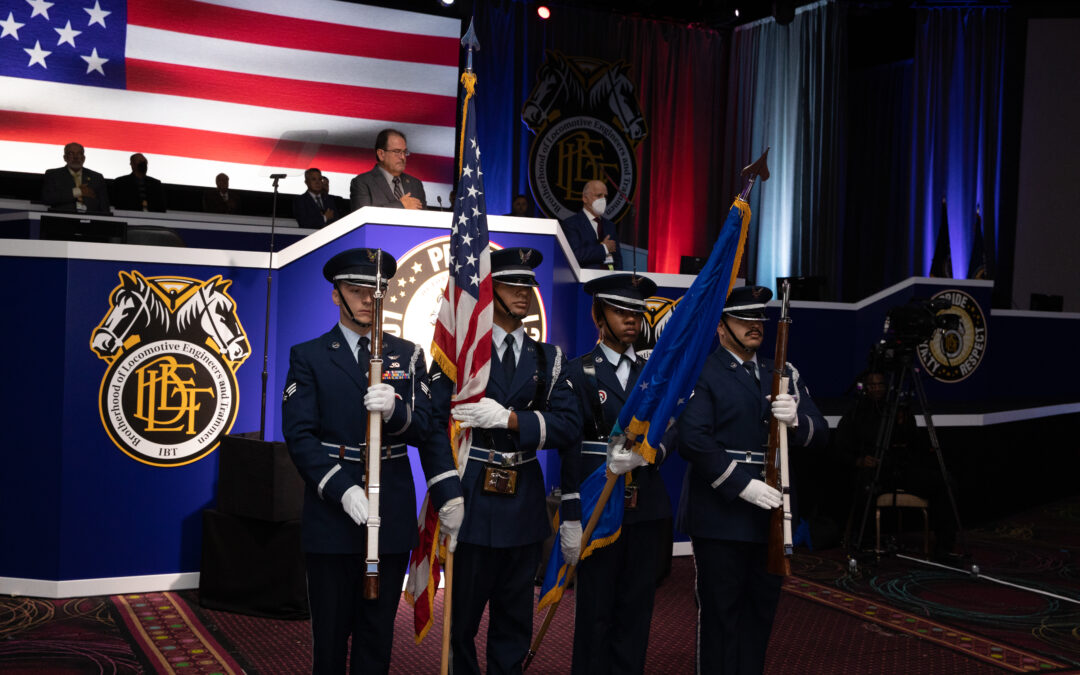 LAS VEGAS, October 11 — A lineup of top Congressional and national labor leaders kicked off the first day of the Brotherhood of Locomotive Engineers and Trainmen (BLET) Fifth National Convention being held in Las Vegas.

Speaker of the House Nancy Pelosi led the afternoon session and voiced strong support for labor in general and rail workers in particular. “The middle class is the backbone of our democracy – and the middle class has a union label on it,” she said. The Speaker condemned the rail industry practice known as Precision Scheduled Railroading and well as the industry’s punitive attendance policies. She saluted the union for the strong stand it took in recent contract battles.

“For our nation’s mighty railroaders: unwavering solidarity is how you stand strong against anti-union forces — and protect your livelihoods,” she said. “Indeed, we saw your power in action in securing the historic Tentative Agreement last month. And that unified spirit will be crucial as we confront the challenges that lie ahead.”

The convention also heard from Rep. Dina Titus, who serves on the House Transportation and Infrastructure Committee and its Subcommittee on Railroads, Pipelines and Hazardous Materials. Titus represents Nevada’s 1st District in Congress, which includes Las Vegas.

O’Brien, who was elected IBT president in 2021 and took office in April of this year, reviewed his administration’s first 202 days of office and expressed his belief that the best part of union membership is the right and obligation to vote on union contracts. The Teamsters leader didn’t mince words when he spoke of railroad management. “Our common enemy is not in this room — it’s the rail carriers,” he said. “They want to degrade your working conditions. They want to divide us. We have to identify and fight the true enemy.”

Rep. Titus devoted much of her presentation to the importance of two-person train crews for maintaining safe rail operations. She pledged to support two-person crew legislation on the national level. “Railroads want one man crews while trains keep getting longer — this is not acceptable.” The congresswoman also warned delegates to think twice about politicians who talk about defending “freedom.” Union rights and the best interests of working people are not the rights most of them want to defend, she said.

Approximately 435 delegates are meeting at the Bally’s Convention Center in Las Vegas this week, representing more than 57,000 locomotive engineers and trainmen members on national freight and passenger rail systems across the United States. More information, including news, photo and video updates, is available on the BLET’s convention website (https://bletconvention.org) and the National Division’s Facebook (https://www.facebook.com/BLETNational/) page.

Much of the day was devoted to discussing and voting on changes to bylaws. Voting was conducted electronically, and the language changes were projected on large video screens.

The convention began with National Division Guide Marketa Wells, a member of BLET Division 766 (Las Vegas), welcoming delegates to Las Vegas, followed by an Air Force Honor Guard presentation of flags. After the playing of the National Anthem, President Pierce led delegates in saluting the men and women of our armed forces, recognizing those delegates and guests who have family in the military and those who are veterans. President Pierce also led the delegates in a moment of silence for those who have suffered losses during the COVID-19 pandemic.

Brother Gary Pedigo, Chairman of the Texas State Legislative Board, served as chaplain for the convention and delivered the invocation.

Brother Luke W. Myers, Division 727 (Sterling, Colo.), introduced and explained the electronic voting devices that each delegate uses in voting on recommendations and changes to the BLET’s Bylaws. Brother Myers is the BLET National Division Director of Bylaws Administration and is serving as Liaison to the Bylaws Committee.

Brother Randy Fannon, Division 37 (Norton, Va.) and Chairman of the Bylaws Committee, began the process of giving his Committee’s Report and Recommendations on changes to the BLET Bylaws. Their reporting will continue throughout the remainder of the week. Brother Fannon began by introducing the members of his committee: Kevin J. Sexton, BLET Division 269 (Long Island, N.Y.); Gary D. Best, BLET Division 498 (Abbeville, S.C.); and James Logan, BLET Division 620 (Fort Worth, Texas). He also recognized Brother Luke Myers, the BLET National Division Director of Bylaws Administration, for serving as Liaison to the Bylaws Committee, and thanked Denise Doody, the BLET National Division Arbitration Department Manager, for her hard work and assistance to the Committee.

John P. Tolman, who had served the BLET as Vice President and National Legislative Representative from 2006 until his retirement at the end of 2021, was the final speaker of the day. He condemned Wall Street’s influence on corporate America and the negative impact it has had on railroad operations. “The people in this room… you are the workers who move the economy, but workers are the ones who are being targeted by CEOs.”