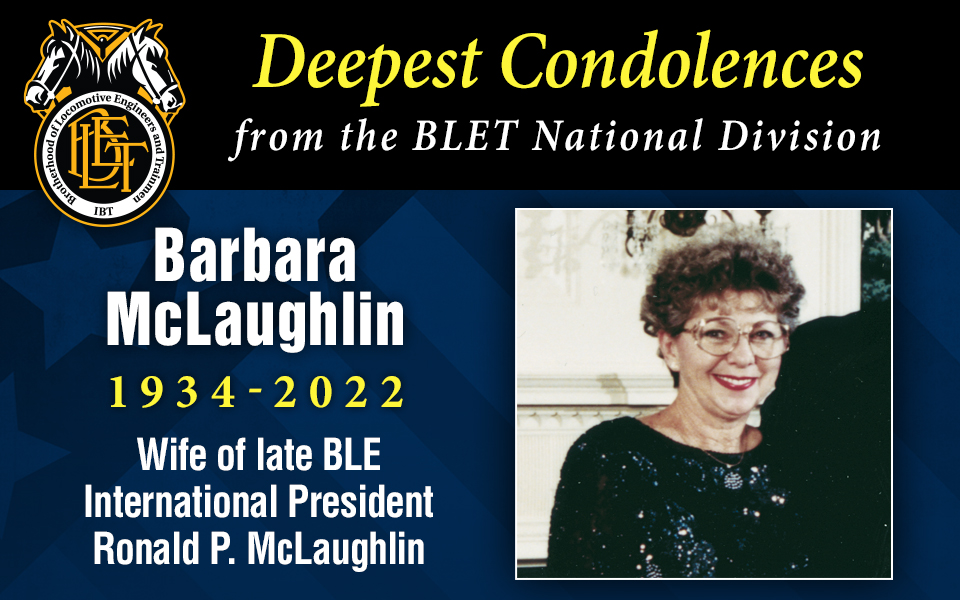 According to a note from the McLaughlin’s surviving sons: “They had a very full and eventful life together and travelled extensively throughout the world. Barbara was an accomplished seamstress, artist, and craftsperson for most of her life. As you have seen she painted and applied her craft skills to just about everything.”

After serving in the U.S. Marine Corps in San Diego, California (1946-1948), President McLaughlin began his railroad career as a fireman on the Chicago, Milwaukee, St. Paul & Pacific Railroad (The Milwaukee Road) on October 16, 1948. He earned promotion to locomotive engineer on October 20, 1952. For more than four decades — from 1955 to 1996 — Brother McLaughlin held various elected offices representing the membership. From 1955-1960, he served as his Division Secretary-Treasurer. From 1960-1980, he served his Division as Local Chairman. From 1980-1986, he served as General Chairman of the Milwaukee Road. From 1986-87, he served as BLE International Vice President, and from 1987-1991, he served as First Vice President.

Barbara is preceded in death by her husband Ron and son Brian. She is survived by sons Kevin (Therese), Greg (Rhonda) and Mark (Leslie), and numerous grandchildren and great-grandchildren. Greg was a Soo Line locomotive engineer for 25 years.

The family asks that donations on her behalf be sent to the American Cancer Society.

“With Barbara by his side, Ron McLaughlin served our Brotherhood faithfully for more than 40 years,” BLET National President Dennis R. Pierce said. “I extend deepest condolences to the McLaughlin family.”