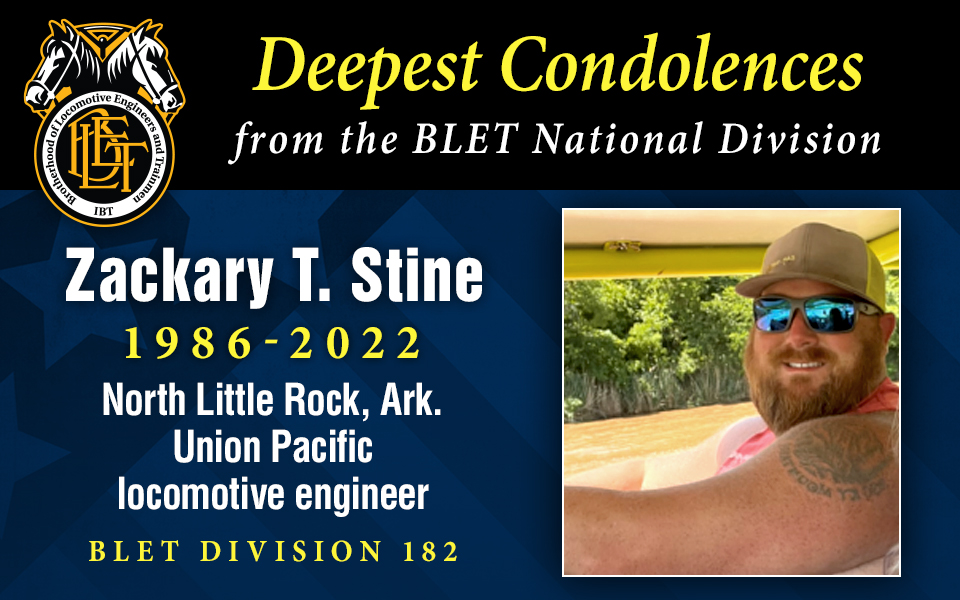 INDEPENDENCE, Ohio, June 3 — A BLET member is being remembered as a hero after giving his life to help save a group of small children from drowning on May 28, 2022.

BLET member Zackary T. Stine, age 36, of Division 182 (North Little Rock, Ark.), bravely and selflessly sprang into action after a group of four small children got caught in a riptide out in the river at Soggy Bottom Trails, an ATV park in Oklahoma. Working with other adults, Brother Stine helped rescue all the children, but, tragically, he got sucked under water and pulled about 150 yards downstream. First responders pulled him from the water and performed CPR, but he was pronounced dead at the scene.

Brother Stine enjoyed hunting, fishing, ATV riding, and being outdoors. He was a Union Pacific locomotive engineer, and had been a BLET member since April 1, 2019.

Memorials can be made to the college fund of Zackary Shane Stine at the Lonoke Banking Center, 1109 North Center Street, Lonoke, Arkansas, 72086.

“In the ultimate act of bravery, Brother Zack Stine died to save the lives of four young children,” BLET National President Dennis R. Pierce said. “Brother Stine will be sorely missed by all who knew him, and he will be remembered as a devoted family man. On behalf of all men and women of the Brotherhood of Locomotive Engineers and Trainmen, I extend our deepest condolences to the family and friends of Brother Zack Stine.”