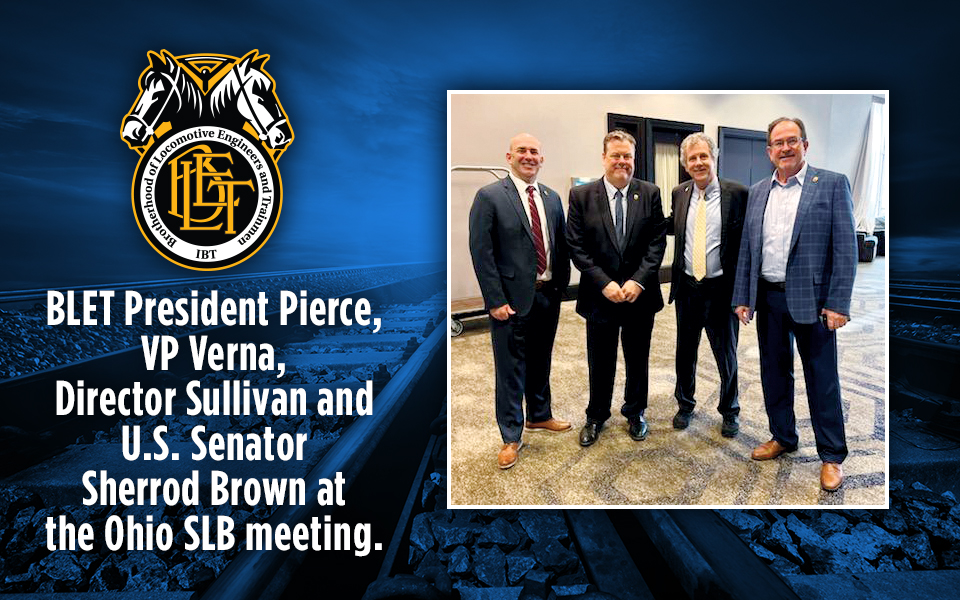 Ohio State Legislative Board Chairman John Esterly opened the meeting with the first speaker being U.S. Senator from Ohio, Sherrod Brown. “It was clear from Senator Brown’s remarks and his active exchanges with the BLET members present that the Senator stands in support of rail labors issues,” President Pierce said.

President Pierce also addressed the group, updating the membership and Senator Brown on the ongoing battle with the Nation’s rail carriers to secure a new national contract and relief from draconian attendance policies. Along with all Rail Unions in the Coordinated Bargaining Coalition, BLET filed with the National Mediation Board on Monday seeking to be released from mediation in an effort to bring closure to the bargaining round.

Vice President Verna also reported to the Officers and Members in attendance on the important legislative and regulatory issues that the BLET’s Washington, D.C. Office is working on.

President Pierce also discussed the Surface Transportation Board hearing underway this week in his discussions with the Ohio State Legislative Board membership. “The STB hearings in Washington are very important to the employees of all Class I railroads. The Board has given Rail Labor a seat at the table, and I am confident that Vice President Mark Wallace, speaking on behalf of the BLET’s members along with the other Unions testifying, will show the Board and the Nation just how inept current railroads management is and how negatively it is impacting the supply chain,” President Pierce said. “While the STB hearing is important, it is equally important that we continue to meet with the BLET membership across the country as we did this week in Ohio. Our attendance at these meetings is even more important when we are given the opportunity to discuss our membership’s issues with a sitting United States Senator. It may take congressional action to end the bargaining round; Senator Brown will play a pivotal role in that process if that is where the contract is resolved.”

Senator Brown’s office issued a press release regarding his attendance at the BLET meeting, which is available here.

The BLET’s Ohio State Legislative Board will conclude its quadrennial meeting later today. President Pierce, Vice President and NLR Verna along with Director Sullivan travel from Columbus, Ohio to San Diego, California today to attend the Quadrennial meeting of BLET’s California State Legislative Board on Wednesday, April 27. President Pierce then travels to Omaha, Nebraska on Thursday, April 28, to participate in BLET’s planned actions at the Berkshire Hathaway Shareholder meetings.