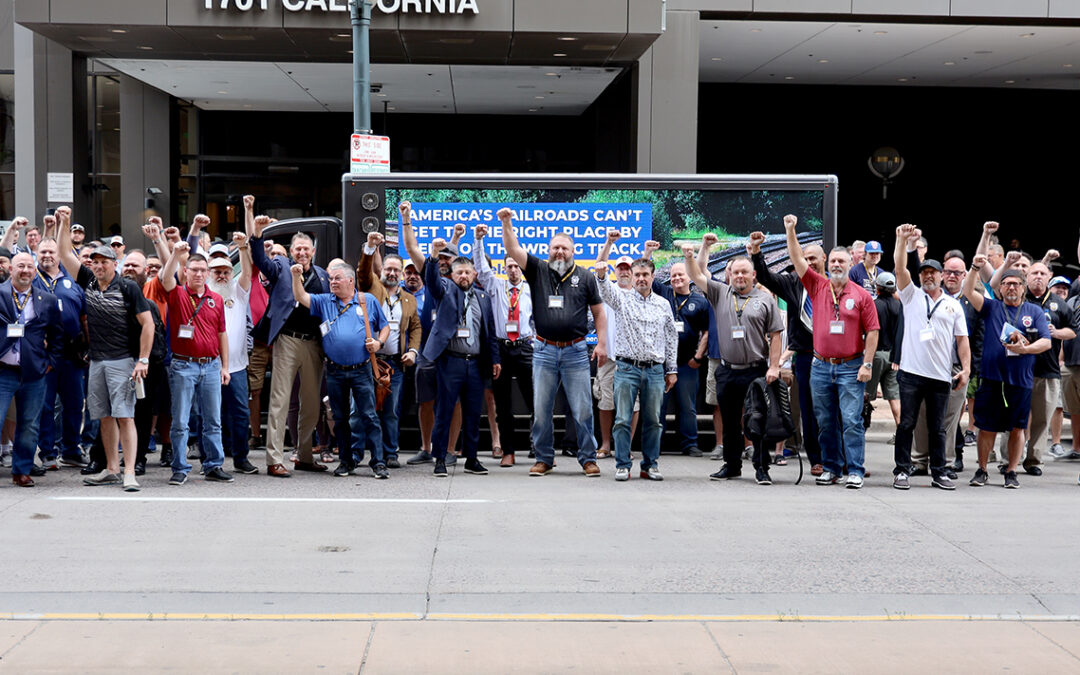 INDEPENDENCE, Ohio, June 14 — More than 370 members of the Brotherhood of Locomotive Engineers and Trainmen and their families convened in Denver, Colorado, on the morning of June 14 for opening ceremonies of the BLET’s first regional meeting of 2022.

After presentation of the flags, Brother Paul Pearson delivered the invocation. Brother Pearson is Chairman of the BLET’s Colorado State Legislative Board and is a member of BLET Division 133 (Denver, Colo.).

President Pierce gave a brief presentation regarding the State of the Union. He provided an update on national negotiations, including the current steps involving mediation before the actual members of the National Mediation Board. “The Railroads have refused to offer or agree to any serious contract proposals that BLET members would find acceptable. We are not alone in this fight,” he said. “All of the Rail Unions involved in national negotiations with the Nation’s freight carriers have received the same pathetic contract proposals that we have.

“Our members have earned a fair contract, and we stand together in our effort to move this dispute to the next steps of the Railway Labor Act. My hope is that the NMB proffers arbitration in the coming days so we can do just that,” he said.

President Pierce also touched upon numerous other issues, including: CSX’s acquisition of the Pan Am Railways; the Canadian National-Kansas City Southern merger; BNSF Railway’s terminated lease of the Montana Rail Link; the BLET’s Fifth National Convention coming up in October; the new BLET website; and the recent International Brotherhood of Teamsters election. Newly-elected IBT General President Sean O’Brien and General Secretary-Treasurer Fred Zuckerman attended the regional meeting welcome reception on the evening of June 13, where they met with BLET members for several hours in an informal setting. President Pierce also announced that the 2023 BLET regional meetings are scheduled for Milwaukee (the week of June 26) and Myrtle Beach (the week of August 14).

As part of the morning session, President Pierce led members in a moment of silence for Brother Paul Wingo, retired BLET National Vice President who passed away at the age of 78 on June 6, 2022. Members in attendance also observed a moment of silence in honor of all BLET members who have been killed in the line of duty since 1989, whose names were shown in a solemn video presentation.

The morning session concluded with a video presentation highlighting the union’s recent efforts to bring attention to the struggles that railroad workers face. In essence, railroad workers have been without a contract pay raise since 2019, yet carriers continually brag about record profits. The BLET is letting the public know about this inequity through several outreach campaigns. A mobile billboard truck was on site at the BLET regional meeting in Denver, where the group en masse adjourned for a brief rally to send a message to rail carriers that they are off track, and that it’s time to settle the national contract by investing in crews and safety.

Members will take advantage of educational opportunities throughout the remainder of the week. Workshops will feature specialized training for BLET Legislative Representatives, Secretary-Treasurers and Local Chairmen. The 2022 Denver regional meeting will conclude with a banquet on the evening of Thursday, June 16.