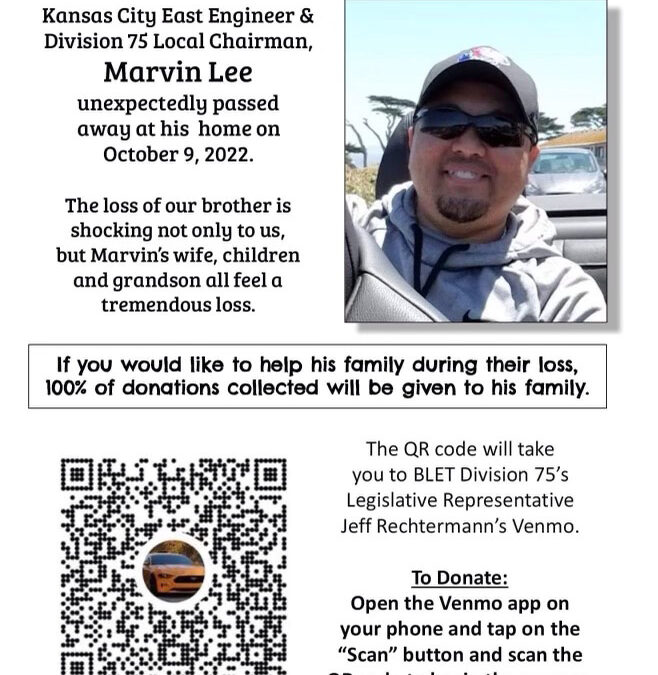 BLET delegates showed their generosity at the Fifth National Convention on October 13, donating money to help the family of a fallen Brother.

BLET National President Dennis R. Pierce announced earlier in the week that Marvin Lee, Local Chairman of Division 75 in Kansas City, Mo., unexpectedly passed away in his sleep on the morning of October 9. He was just 49 years old. Brother Lee was a highly-respected union officer who leaves behind his wife, two children, and one grandchild.

Brother Bill D. Burchett, the delegate representing BLET Division 391 (Fort Madison, Iowa), rose to speak on behalf of Brother Lee’s family. The delegates showed their generosity by donating several thousand dollars to help the Lee family during their difficult time. Brother C.C. Fuller II, the delegate representing BLET Division 75 (Kansas City, Mo.), also rose to speak to the integrity of Brother Lee’s character and his devotion to his family, noting that he will also be greatly missed by his railroad family.

Those wishing to donate to the Lee family may do so by contacting BLET Division 75 Legislative Representative Jeff Rechtermann. Brother Rechtermann is accepting donations for the family through the Venmo app, and a QR code is provided below. One-hundred percent of all donations will be given to the Lee family.

The delegates also observed a moment of silence in memory of Brother Lee. President Pierce thanked the delegates for their generosity.

In an additional act of kindness, the BLET donated more than 250 boxed lunches to the Las Vegas Rescue Mission to help feed the homeless.