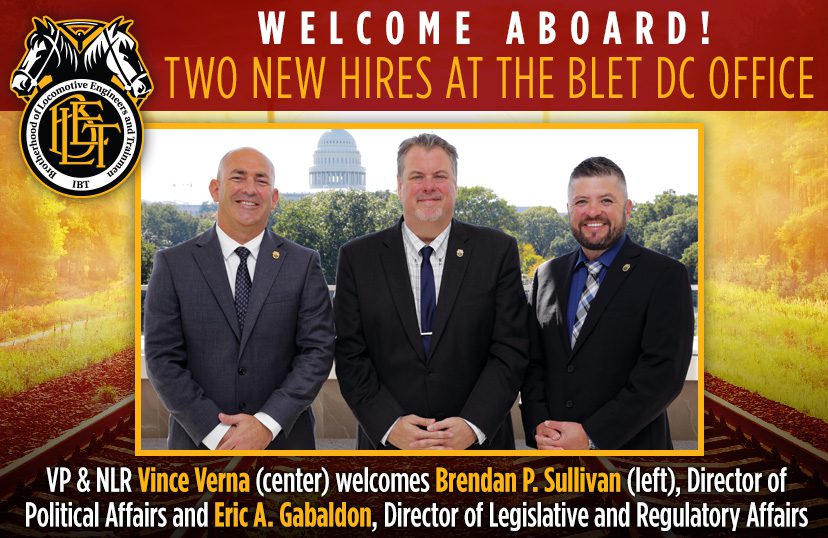 As the Director of Legislative and Regulatory Affairs, Brother Gabaldon will promote legislative and regulatory efforts that are beneficial to BLET members, and collaborate with other organizations to earn the backing of government officials and the public. Most recently, Brother Gabaldon served the BLET as Chairman of the New Mexico State Legislative Board, having won election to that position in 2016 and 2020. Additional duties will include review and analysis of existing and proposed legislation, meeting with local, state, and federal government officials and lobbyists, and updating the BLET’s officers on relevant laws and regulations that impact our members.

Both Brothers will work under the direction of National President Pierce and Vice President and National Legislative Representative Vincent G. Verna.

“Brother Gabaldon and Brother Sullivan have our full support at the National Division, and I know each Brother will bring a strong work ethic and unique experience to their new position,” President Pierce said. “I look forward to working closely with these Brothers and have every confidence that they will do an excellent job advocating for BLET members on Capitol Hill.”

Vice President Verna said BLET members throughout the country will benefit from having a full staff in Washington, D.C.

“I am very happy to welcome Eric and Brendan to the D.C. Office,” Vice President Verna said. “We now have a complete team and are working to get everyone up to speed in the Office. I share the full confidence expressed by President Pierce in Brothers Eric and Brendan. They bring over 40 years of combined experience to bear in the performance of their new duties. BLET members can have pride and confidence in these good Brothers. They have already demonstrated a very significant level of commitment to relocate their families to the D.C. area to help strengthen BLET’s presence in Washington.”

Brother Gabaldon is a Burlington Northern Santa Fe (BNSF) locomotive engineer who has held continuous membership in Division 400 since March 1, 2006. He hired out as a mechanical laborer with the BNSF railway in Belen, N.M., in 1998. He transferred to train service on March 12, 2003, and earned promotion to locomotive engineer on August 11, 2003 on the El Paso Subdivision station in Albuquerque, New Mexico.

Brother Gabaldon was elected to four terms as Division 400’s Local Chairman that began in 2010, 2013, 2016 and 2019. He was also elected to a term as Legislative Representative for Division 400 beginning in 2016 and elected to two terms as Chairman of the New Mexico State Legislative Board in 2016 and again in 2021. Since March of 2021, Brother Gabaldon has represented the BLET as a member of the Switching Operations Fatality Analysis (SOFA) Working Group.

Brother Gabaldon is a third-generation railroader. His grandfather was a clerk for the Santa Fe railroad. His father retired after 34 year of service in Maintenance of Way for the former Santa Fe/BNSF railroad. His brother Esequiel “Zeke” Gabaldon is a Car inspector/rapid responder in Belen, New Mexico, for BNSF. His uncles Dennis and Barney Silva are both retired switchman/conductors for the former Santa Fe/BNSF railroad.

Brother Gabaldon and his wife, Nicole, were married on March 8, 2014. They have three sons and one daughter Jace, Bryce, Cole and his twin sister Peyton. They spend most of their free time coaching or watching their sons baseball and other sports activities. They also enjoy camping, hunting and fishing.

“I learned from a young age the importance of Unions and the importance of Union participation going to meetings with my father,” Brother Gabaldon said. “He always told me to get involved and protect what our past Brothers and Sisters fought for. I grew up in a Union household and enjoyed the benefits it provided me. Today, I raise my family and am enjoying those same benefits and more thanks to the BLET.”

As a fifth generation railroader, Brother Sullivan spent his childhood riding on Amtrak trains. His great-great grandfather worked as a railroad crossing guard, manually lowering gates to protect horses and buggies from approaching trains. His great uncles were both car inspectors for the New York, New Haven, and Hartford Railroad Company. Brendan’s grandfather joined the Army and was assigned to the railroad battalion. He operated troop trains both domestically and abroad during WWII. He would return home from war to work as a yardmaster for the New York, New Haven, and Hartford. Brother Sullivan’s father would also follow in the family tradition by going to work for the railroad as a car inspector with Amtrak.

Brother Sullivan has worked for over 21 years with CSX Transportation out of Sanford, Florida. Initially he worked “on the ground” as a conductor before moving to engine service. Upon becoming a locomotive engineer, Brendan joined BLET Division 769. He went on to be elected to the positions of Division President, Legislative Representative, and Local Chairman. In addition, Brendan served on the Florida State Legislative Board as both Vice Chairman and Chairman. During his free time, Brendan enjoys hiking, biking, playing guitar, and spending time with his wife and two daughters.

“I believe that organized labor is the tide that raises all ships,” Brother Sullivan said. “When unions negotiate and create a prevailing wage, all American workers, union and non-union benefit. I am proud to be a union member, and thankful for all of the opportunities that union stability has created for myself and my family.”