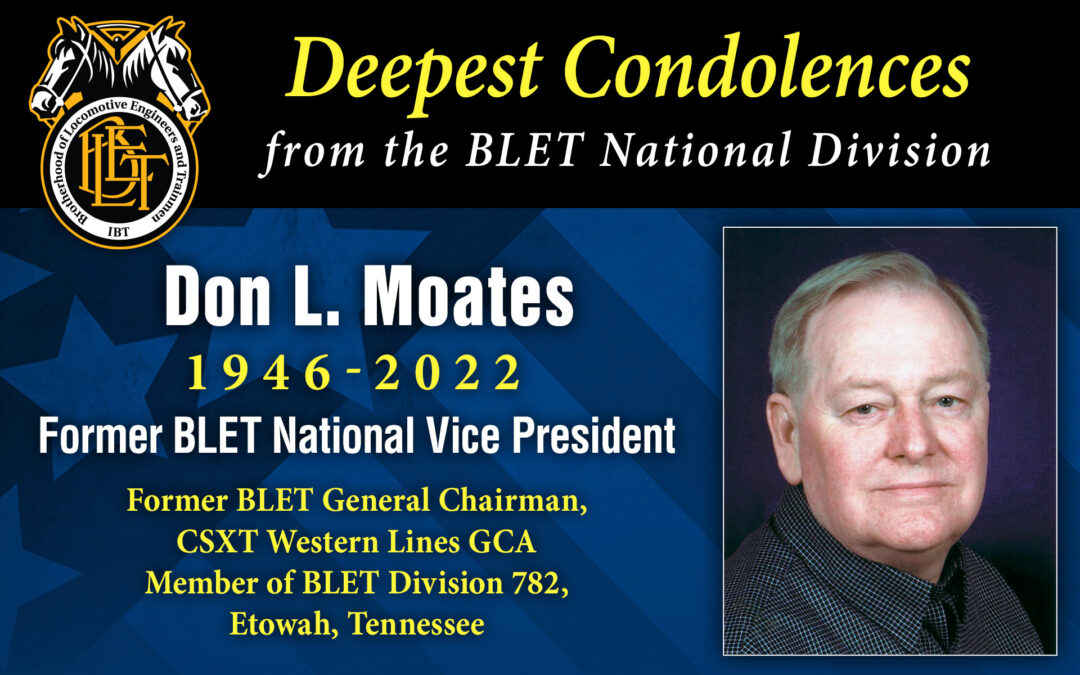 INDEPENDENCE, Ohio, December 24 — Former BLET National Vice President Don L. Moates passed away on December 23, 2022. He was 76 years old. He served the Brotherhood in numerous roles throughout his 51 years of continuous membership.

Brother Moates began his railroad career in February of 1971 when he hired out as a brakeman on the former Louisville & Nashville Railroad (L&N). He was promoted to fireman in September of 1971 and earned promotion to locomotive engineer on April 2, 1972. He joined BLET Division 782 (Etowah, Tenn.) on December 1, 1971.

He served as General Chairman of the L&N General Committee of Adjustment (GCA) from 1985-1994, and as General Chairman of the CSXT Western Lines GCA from 2005-2010. Brother Moates was elected to the position of fifth-alternate vice president at the BLET’s First Quadrennial Convention in Las Vegas, Nevada, in 2006, was elevated to the office of National Vice President on July 1, 2010. His retirement became effective on February 1, 2011.

“Don Moates was an outstanding union leader who will be sorely missed by those of us in his railroad family,” BLET National President Dennis R. Pierce said. “On behalf of all men and women of the Brotherhood of Locomotive Engineers and Trainmen, I extend our most heartfelt condolences to the family and friends of Brother Don Moates.”

Funeral arrangements are pending and will be announced when available.