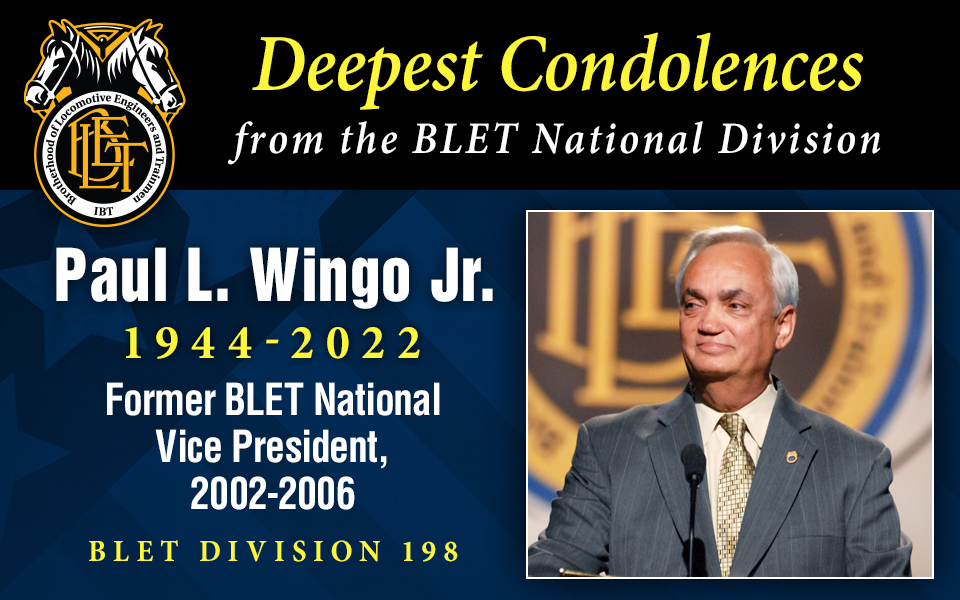 Following four years of active duty in the U.S. Marine Corps in the early 1960s, Brother Wingo began his railroad career in 1966 when he hired out as a switchman with the Southern Railroad. He earned promotion to locomotive engineer in 1969 and joined BLE Division 198 (Chattanooga, Tenn.) on September 5, 1969.

During his tenure as Vice President, Brother Wingo was assigned to assist the BLET’s Norfolk Southern General Committees of Adjustment, where he helped to negotiate the first short-term disability agreement at Norfolk Southern for BLET members. He was also assigned to various short line railroads, including the Meridian Southern, New England Central, Iowa, Chicago & Eastern, and the New York Susquehanna & Western. Brother Wingo assisted with national contract negotiations as part of the National Wage/Rules Team and helped to negotiate a contract agreement with the New England Central, which was ratified in 2006. From 2002-2004, Brother Wingo served on the Finance Committee that helped lay the foundation for the merger between the BLE and International Brotherhood of Teamsters. He also served as the BLET’s Security Officer in the wake of the 9/11 terrorist attacks, pioneering ways to make the rail industry more secure. A month after the horrific Norfolk Southern train derailment in Graniteville, S.C., Brother Wingo represented the BLET at a candlelight vigil and prayer service in Graniteville to honor the victims, including the train’s locomotive engineer and BLET member Christopher Seeling.

“For nearly 40 years, Paul Wingo dedicated himself to serving the members of our Brotherhood,” BLET National President Dennis Pierce said. “He had a tremendous amount of compassion for his fellow railroaders and their families, and he used his skills and knowledge to go above and beyond the call of duty in protecting their rights and interests. Paul was not only a Brother, he was a friend to many of us and he will be deeply missed. On behalf of all men and women of the BLET, I extend my deepest condolences to the family and friends of Brother Paul Wingo.”

Information regarding memorial services will be made available soon.