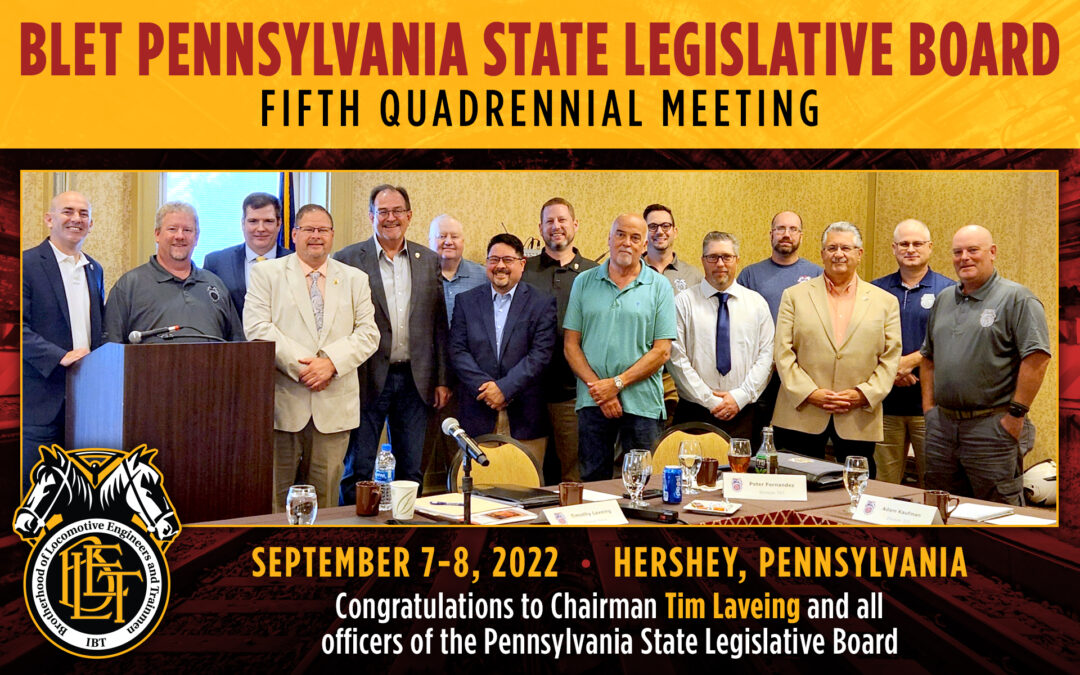 INDEPENDENCE, Ohio, September 26 — Brother Tim M. Laveing was reelected by acclamation to his second term as Chairman of the Pennsylvania State Legislative Board at its fifth quadrennial meeting in Hersey, Pa., September 7-8, 2022.

A Norfolk Southern locomotive engineer, Brother Laveing is a member of BLET Division 325 (Wilkinsburg, Pa.). He joined the BLET on June 1, 2001. He hired out with Conrail in 1998 and following the split of Conrail by CSX and NS, he chose to work for NS. He attended the locomotive engineer training program in 2000 and earned promotion to locomotive engineer in 2001. Brother Laveing has been an active and involved union leader throughout his career. In 2010, he was elected Legislative Representative of Division 325. He has served the Pennsylvania SLB in various elected offices over the years, including Alternate Secretary-Treasurer (2010), Secretary-Treasurer (2014), and Chairman (2018 and 2022, both by acclamation). Brother Laveing also currently serves Division 325 as Local Chairman.

“I congratulate and thank Brother Laveing and all officers of the Pennsylvania State Legislative Board,” President Pierce said. “Although my time attending the meeting and visiting with the Board’s officers was short, their dedication to the membership was front and center.”

Chairman Laveing said: “I am proud to serve the BLET Pennsylvania State Legislative Board for a second term as Chairman. I am even more proud to have all of the officers elected to the board and the other Legislative Representatives in this state. We had 9 of 14 Divisions Represented at our fifth quadrennial. I was happy to see new faces including two that did not seek election: Roger Eldridge of Division 71 (Philadelphia, Pa.) and John Wagner of Division 287 (Altoona, Pa.). All of our officers and these two gentlemen put all the tools in our box to make this board successful. It was an honor to have President Pierce with us and the legislative arm of the BLET be represented well with Brenden Sullivan and Sean Simon. Our members here in Pennsylvania literally saw first-hand how hard these officers work for this Brotherhood.”

“It was an honor to have Ken Kertesz serve as our Parliamentarian,” Chairman Laveing said. “Brother Ken served this board with distinction as Chairman for many years and blazed a path for us to follow including affiliating us with the Pennsylvania Conference of Teamsters and Pennsylvania AFL-CIO.”