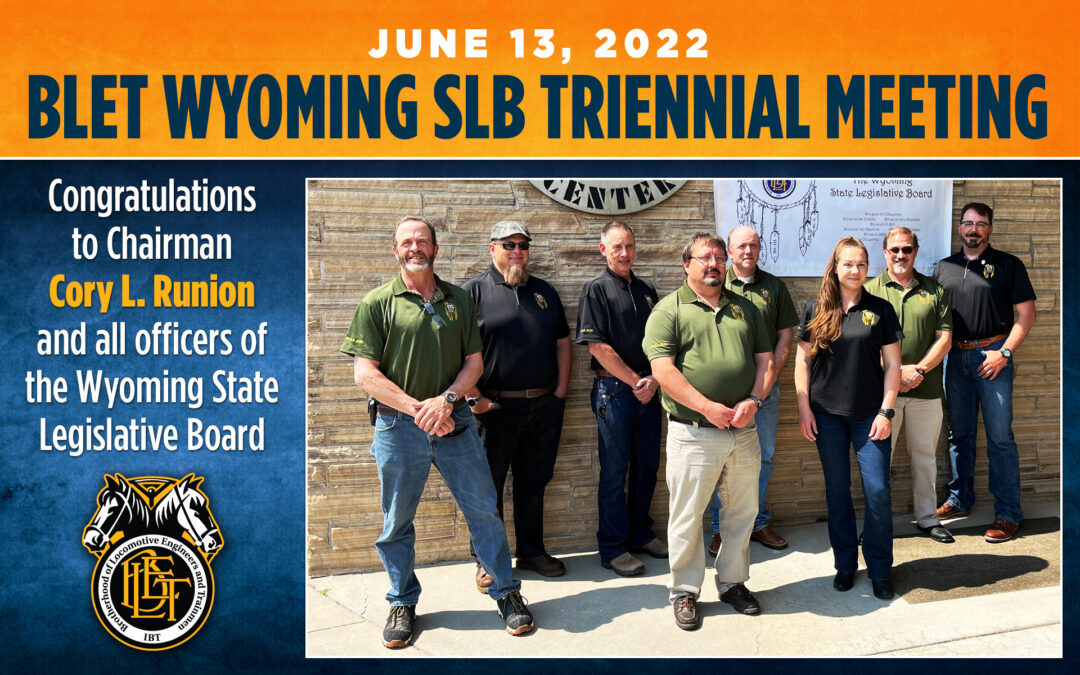 INDEPENDENCE, Ohio, August 11 — The BLET’s Wyoming State Legislative Board (WYSLB) convened its triennial meeting on June 13, 2022, at the Wyoming AFL-CIO Labor Center in Cheyenne, Wyoming. This was a closed meeting was for WYSLB elections and business. At the completion of WYSLB business the board then traveled to Denver for the BLET Regional meeting in aim to meet, listen and speak with their BLET National Division representatives.

The WYSLB election results were all by acclamation. Chairman Cory L. Runion, Division 115 (Cheyenne) was reelected and will serve his fifth term as the WYSLB Chairman. In 2007 Brother Runion was elected Vice Chairman for the WYSLB and was elevated to the office of Chairman after the retirement of WYSLB Chairman Terry Jones in 2009. Brother Runion was subsequently reelected at triennial meetings in 2010, 2013, 2016 and 2019. He is a Union Pacific locomotive engineer who joined the BLET on December 1, 2000.

“Brother Runion is one of our veteran legislative leaders and I am pleased to congratulate him and all officers of the Wyoming State Legislative Board,” BLET National President Dennis R. Pierce said. “I thank these Brothers and Sisters for their dedication to our Brotherhood, and I know they will do an excellent of representing our members in the proud state of Wyoming.”

Brother Russell E. Sapp, Division 142 (Rawlins), was elected to his second term as Alternate Secretary-Treasurer. He has been a member of the WYSLB since 2018. The WYSLB Trustee Committee has been filled as follows: Sister Audra M. Smith, Division 94 (Gillette), was elected in 2021 for her first term; Brother Michael F. Fielder, Division 869 (Greybull), has served multiple terms as trustee and has served the board since 2009; and Mark Avery, Division 103 (Cheyenne) enters his first term as trustee. The Alternate Trustee members are George Johnson, Division 207 (Casper), and Steven S. Dyer, Division 31 (Bill). Brother Dyer has been a faithful WYSLB member since 2012 and has served as a trustee for several terms.

“I would like to Congratulate all WYSLB participating members and thank them for their dedication in being involved with their Union,” Chairman Runion said.

“We would like to thank our guests for attending our triennial meeting,” Chairman Runion said. “They were both very informative on important issues. Both the ESPC and Wyoming AFL-CIO are organizations that we closely collaborate with year in and year out to help support and advocate for organized labor in the state of Wyoming.”

Upon conclusion of the WYSLB Triennial meeting, the board traveled to Denver, Colorado, to attend the BLET Denver Regional Meeting. Attending the Denver meeting allowed WYSLB members the chance to listen to and speak with their BLET National Representatives. Members were also able participate in legislative training.

“The BLET Regional Meeting was very informative and the WYSLB members returned home more educated about important upcoming issues facing our Brotherhood,” Chairman Runion said. “Thank you to all BLET representatives, employees and attendees for a great Regional Meeting.”