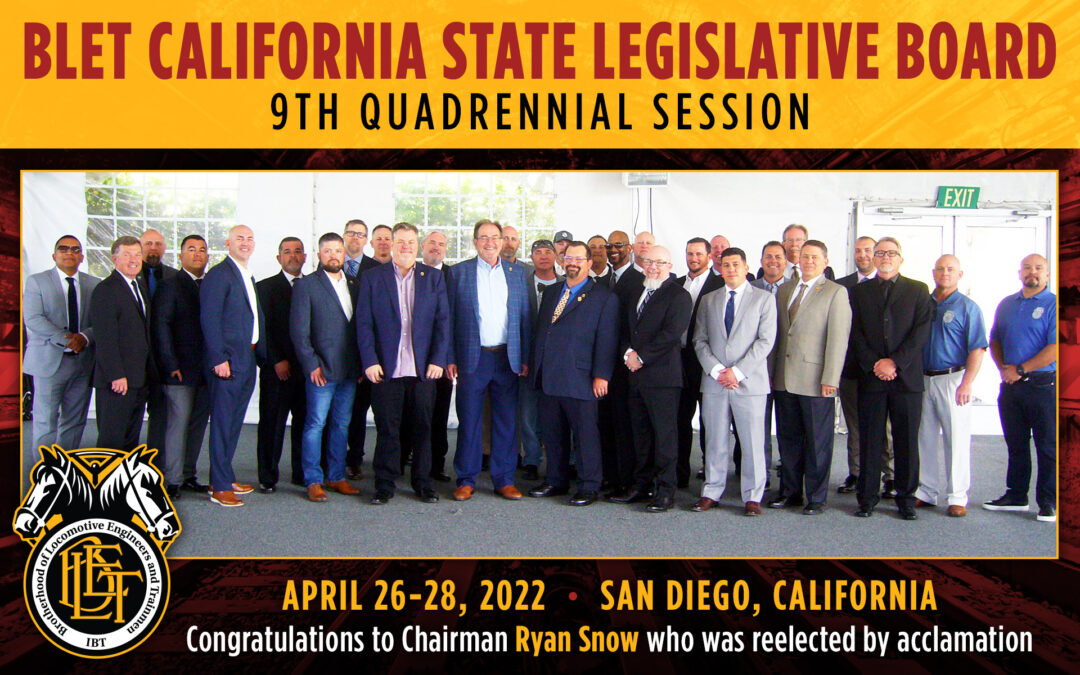 INDEPENDENCE, Ohio, May 12 — Ryan K. Snow was reelected by acclamation to his third term as Chairman of the California State Legislative Board during its 9th quadrennial session held in San Diego, California April 26-28, 2022.

A member of BLET Division 126 in Bakersfield, Calif., Brother Snow is a Union Pacific locomotive engineer. He first joined the Brotherhood on December 1, 1999. He hired out with the Union Pacific at Bakersfield, Calif., in 1998 and earned promotion to locomotive engineer in 1999, learning from former Vice Chairman Ron Marney. Brother Snow was elected to the office of 1st Vice Chairman at the California SLB’s 2010 quadrennial meeting and was reelected by acclamation in 2014. Brother Snow began serving his first term as Chairman following the retirement of Timothy L. Smith on January 21, 2017, and was reelected to his second term at the Board’s quadrennial session in 2018.

During the quadrennial session, members of the California State Legislative Board joined President Pierce and numerous other special guests to rally by a mobile billboard that is part of the union’s outreach campaign demanding that railroads invest in train crews and safety. The BLET’s outreach campaign educates railroad investors and the general public about harsh railroad attendance policies, the dangers of PSR, and the stalled state of national contract negotiations. The message is being shared through digital and print advertising in numerous areas across the United States.

“I am proud to congratulate Chairman Snow and all California State Legislative Board officers on their election,” President Pierce said. “I also thank these Brothers and Sisters for their dedication to our Brotherhood and their support of our outreach campaign as we seek a fair settlement in the current round of national contract negotiations.”

Brother Snow is a U.S. Navy veteran, having proudly served from 1982-1986. He and his wife Verna were married in 1987. In a show of support for Chairman Snow, his nomination for Chairman was introduced by Brother John Mobley, and was then seconded by 19 delegates.

“I pledge to keep the fight and continue to do the very best I can for my members and those they represent,” Brother Snow said.