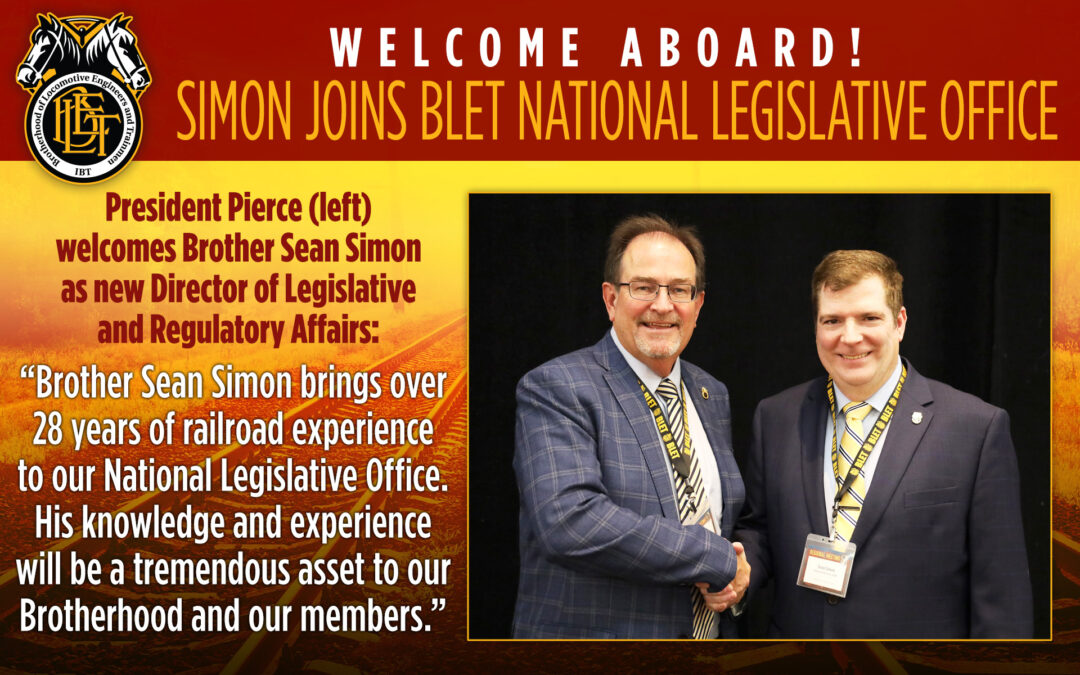 As the Director of Legislative and Regulatory Affairs, Brother Simon will promote legislative and regulatory efforts that are beneficial to BLET members, and collaborate with other organizations to earn the backing of government officials and the public. Most recently, Brother Simon served the BLET as Chairman of the New Jersey State Legislative Board, having won election to that position in 2016 and 2020. Additional duties will include review and analysis of existing and proposed legislation, meeting with local, state, and federal government officials and lobbyists, and updating the BLET’s officers on relevant laws and regulations that impact our members.

“Brother Sean Simon brings over 28 years of railroad experience to our National Legislative Office, having worked as a Conrail and Norfolk Southern locomotive engineer,” President Pierce said. “He has held elected union office for over 25 years. His knowledge and experience will be a tremendous asset to our Brotherhood and our members. I have every confidence he will do an excellent job of representing our members in Washington, D.C.”

A Norfolk Southern locomotive engineer, Brother Simon hired out with Conrail in March of 1994. He earned promotion to locomotive engineer in August of 1995 and joined the Brotherhood effective October 1, 1997. In 2021, Brother Simon was reelected by acclamation to his fifth term as Local Chairman of Division 226 in Newark, N.J. He also serves Division 226 as the Alternate Legislative Representative.

“I am proud to welcome Brother Simon to our National Legislative Office and I look forward to working with him,” Vice President Verna said. “Brother Simon will be busy with a full agenda of regulatory duties and I echo the sentiment of President Pierce that Brother Simon is ready for and up to the task.”

Brother Simon thanked the Brotherhood for the opportunity.

“I would like to thank President Pierce, the entire Executive Committee,  and Vice President Verna for this opportunity, as it is a privilege to serve our Brotherhood,” Brother Simon said. “The Legislative Office in Washington D.C. is vital toward advancing the interests and concerns of our brothers and sisters on regulatory, legislative and political matters. I am honored to be joining the team.”