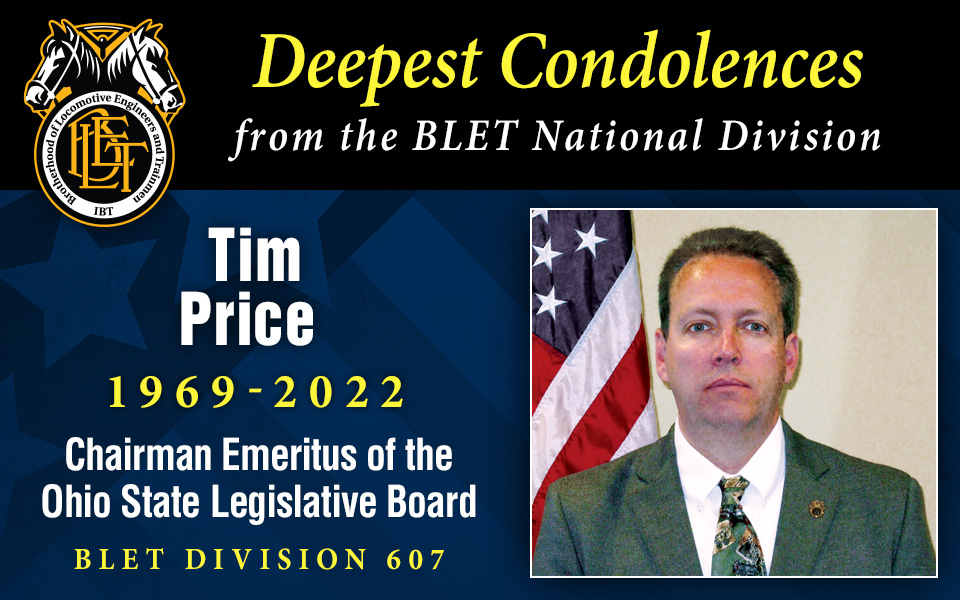 INDEPENDENCE, Ohio, May 26 — Timothy T. Price, Chairman Emeritus of the Ohio State Legislative Board, passed away on May 15, 2022, after a battle with cancer. He was 53 years old.

Brother Price became an elected union officer in the early 2000s and served his Division for 20 years as Legislative Representative. In 2006, he was elected 2nd Vice Chairman of the Ohio State Legislative Board, moving up to 1st Vice Chairman a short time later. He was twice re-elected by acclamation to the office of 1st Vice Chairman — in 2010 and 2014. In 2015, Brother Price was elevated to the office of Ohio State Legislative Board Chairman, and was elected by acclamation to continue serving as Chairman at the Board’s 16th quadrennial meeting in Columbus, Ohio, April 22-24, 2018.

Brother Price resigned as Chairman in March of 2021. Incoming Chairman John Esterly and the members of the Ohio State Legislative Board voted unanimously to dedicate their 2022 quadrennial meeting to Brother Price.

Brother Price is survived by his wife Tetianna and daughter Cami. Tetianna is a member of the BLET Auxiliary, and Cami is a multi-year winner of Auxiliary scholarships.

“Tim Price was a dedicated, active, and involved union officer for 20 years,” BLET National President Dennis R. Pierce said. “During his tenure as chairman, Brother Price spearheaded Ohio State Legislative Board involvement during National Train Day and Labor Day events. He also testified multiple times at the state capitol in Columbus in favor of rail worker safety legislation and against anti-union legislation. Through these and other important public outreach events, Brother Tim helped to shed a positive light on our Brotherhood. He leaves behind an enduring positive legacy and he will be missed by those who knew him. On behalf of all members of the BLET, I extend my deepest condolences to the family and friends of Tim Price.”