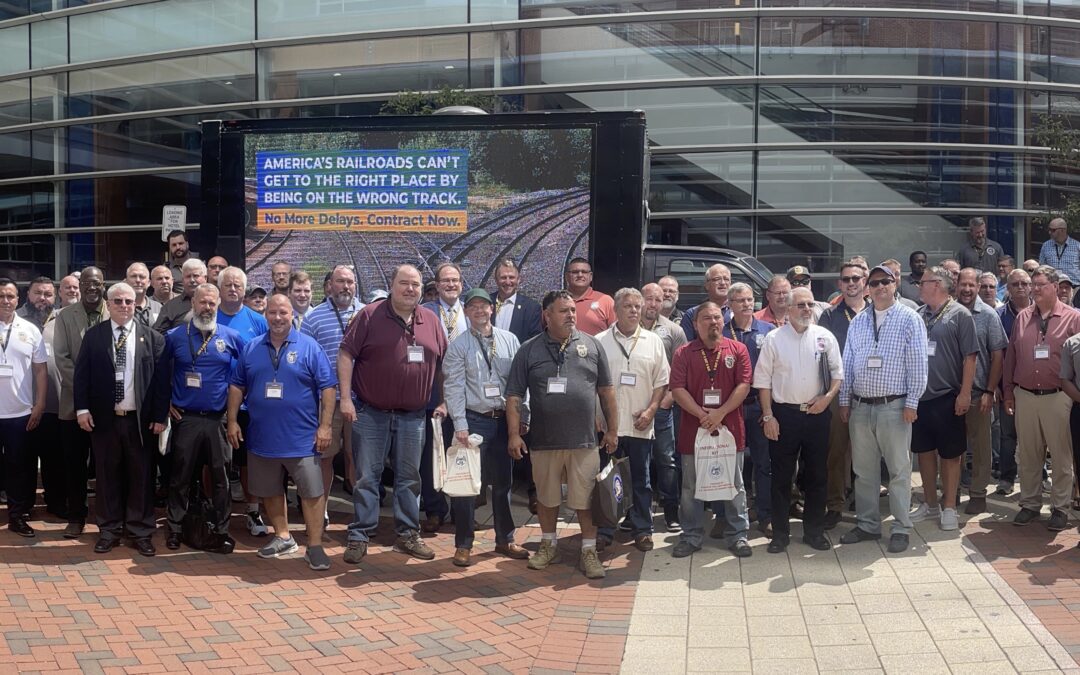 INDEPENDENCE, Ohio, August 3 — More than 200 members of the Brotherhood of Locomotive Engineers and Trainmen and their families convened in Baltimore, Maryland, on the morning of August 2 for the opening ceremonies of the BLET’s second regional meeting of 2022.

BLET National President Dennis R. Pierce called the meeting to order. Boy Scouts from Troop 414 out of Pasadena, Maryland, presented the colors. After the presentation of the flags, Brother Don T. Hill delivered the invocation. Brother Hill is General Chairman of the BLET’s SEPTA General Committee of Adjustment and is a member of Division 71 in Philadelphia, Pa.

President Pierce gave a brief presentation regarding recent and upcoming events involving the BLET. He provided an update on national negotiations, including a recap of how the Brotherhood went from serving our Section 6 notices at the beginning of November 2019 to a Presidential Emergency Board at the end of July 2022.

“I hope this provides you with an understanding of this long and incredibly frustrating round of national bargaining,” President Pierce said. “Our members have earned a fair contract, and we stand together in our effort to continue to fight for a fair contract.”

President Pierce also touched upon numerous other issues, including: the FRA’s recent proposed rulemaking regarding two-person train crews; CSX’s acquisition of the Pan Am Railways; the Canadian National-Kansas City Southern merger; BNSF Railway’s terminated lease of the Montana Rail Link; and the BLET’s Fifth National Convention coming up in October. President Pierce also announced that the 2023 BLET regional meetings are scheduled for Milwaukee (the week of June 26) and Myrtle Beach (the week of August 14).

President Pierce announced the pending retirement of two members of the BLET Advisory Board who were in attendance — Brother Lee Pruitt and Brother Steve Bruno. Brother Pruitt has served the BLET National Division as First Vice President for the past 12 and has 50 years of BLET membership, while Brother Bruno has served as National Secretary-Treasurer for the past eight years and has 37 years of membership. President Pierce presented First Vice President Pruitt with a 50-year membership pin. Brother Pruitt and Brother Bruno each gave short presentations to the audience.

As part of the morning session, President Pierce led members in a moment of silence for Brother Keith Bass, a member of BLET Division 48 (St. Louis), who last week passed away at the age of 46 following a crew van accident. Members in attendance also observed a moment of silence in honor of all BLET members killed in the line of duty since 1989, whose names were shown in a solemn video presentation.

The morning session concluded with a video presentation highlighting the union’s recent efforts to bring attention to the struggles that railroad workers face. In essence, railroad workers have been without a contract pay raise since 2019, yet carriers continually brag about record profits. Through several outreach campaigns, the BLET is letting the public know about this inequity. A mobile billboard truck was on-site at the BLET regional meeting in Baltimore, where the group en masse adjourned for a brief rally to send a message to rail carriers that they are off track, and that it’s time to settle the national contract by investing in crews and safety.

Members will take advantage of educational opportunities throughout the remainder of the week. Workshops will feature specialized training for BLET Legislative Representatives, Secretary-Treasurers, and Local Chairmen. The 2022 Baltimore regional meeting will conclude with a banquet on the evening of August 4.