BLET Strike Vote: The rest of the story 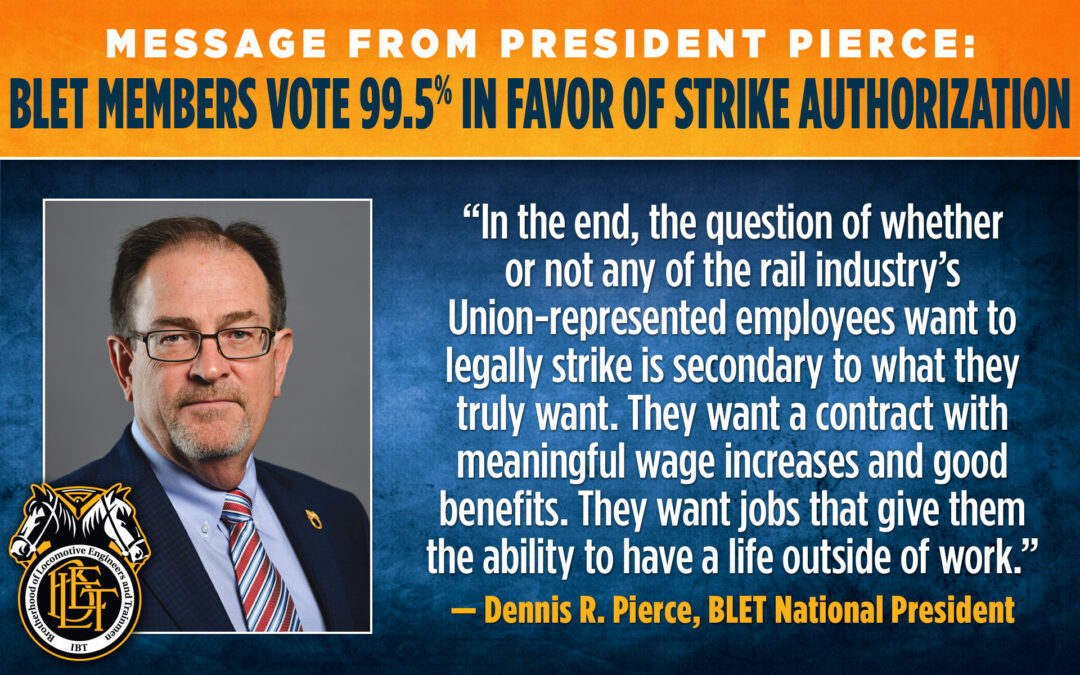 Today, the Brotherhood of Locomotive Engineers and Trainmen tallied the ballots cast in its first nationwide strike vote over national contract negotiations since 2011. In a showing of solidarity and unity, 99.5% of the participating members voted to authorize a strike should such action become legal in the coming days, and become necessary to secure a contract worthy of their consideration. Contrary to the self-serving propaganda being spread by the rail carriers, the BLET membership owes no one an apology for voting as they did. I too voted with the majority and I applaud them for doing it. But there is more to this story than just casting a vote in favor of striking.

In the years preceding the pandemic, the majority of the nation’s Class I rail carriers adopted slash and burn operating plans with only one goal in mind; profits without regard to the health, safety, satisfaction or well-being of their employees, their customers or our Nation at large. To accomplish their goals, they furloughed or fired a third of their nationwide workforce, forcing the remaining employees to work more. They began running longer and longer trains, without regard for safety concerns, that continue to all but shut down the rail networks due to an infrastructure never designed to run these longer and heavier trains. As the post pandemic economy started to ramp up, they refused to adequately staff their operations, continually blaming their remaining employees for rail carrier actions that negatively impacted their shippers. Draconian attendance policies were implemented, forcing engineers and conductors to work day in and day out with no scheduled time off or be fired. These ridiculous policies forced thousands of employees out of the industry, either by resignation or termination, further compounding an already understaffed operation. And if anyone is close to being abused as much as the employees by this business model, it’s the shippers, or as they should be called, the rail industries’ customers.

Most of this information has been in the news, but there is a reason that nothing is changing. This “employee and shipper be damned” business model accomplished the goal it set out to; it continues to make record profits even as the rest of the Nation’s economy struggles due to a supply chain crisis created in large part by the carriers’ business model. In short, the railroads used and continue to use their economic strength to steam roll their employees, their customers and the Nation, all for the sake of their bottom line, and it is clear that they have no intentions of changing.

Now, let’s throw a national contract negotiation into this already toxic workplace. The BLET members who voted to strike this week have worked for incredibly profitable railroads for over three years without a wage increase. They were considered essential workers during the height of the pandemic, forced to work day in and day out or be fired, with no financial recognition for doing so. All the while, the rail carriers’ “profits over all else” mentality completely saturated our contract negotiations. Let’s be clear; in our third year of negotiations, the rail carriers have never made a contract proposal to our Union that their employees, our members, would accept. Not once.

Conversely, the united rail unions, bargaining as coalitions, have made contract proposals that would improve the financial standing and quality of life of the hard-working Americans who make up our collective memberships. There is no fact-based argument that the rail carriers cannot afford the Union’s proposals nor do they even make such a claim. Rather, consumed by corporate greed that would make the robber barons of old blush, they just simply don’t want to share their record profits with their employees. Ironically, our proposals if adopted, would actually improve the workplace, improve the rail carriers’ ability to hire and adequately staff their operations and, in the end, improve the current railroad supply chain crisis that was created by railroad management.

Instead, the rail carriers have stonewalled at the bargaining table, adding insult to injury with their workforce every day as inflation drives the cost of living through the roof. One railroad CEO called certain operating employees, who actually move the nation’s freight doing what have become thankless jobs, “unnecessary” in a public appearance. People off of the street are being offered thousands of dollars to hire on at the railroad with no experience, only to work alongside existing experienced employees who have not had a contract raise for three years. Rail carriers refuse to deliver cars on time every day of the week, all but creating their own “job action” as they shut down industry after industry without any concern.

Today, the rail industry is running a full-blown media blitz asking for government intervention to save them from a possible legal job action by the employees that they have abused for years. Consider the hypocrisy in that. The railroads continue to tell the Surface Transportation Board, Department of Transportation and Federal Railroad Administration that the government should stay out of their failing business model despite shipper complaints. But when it comes to dealing with their own employees, they now seek government intervention rather than just make a contract offer that their employees would accept and be done with the bargaining round.

The real bottom line is this. It is a sad, shameful day when employers treat their employees so poorly that those employees are forced to exercise their economic strength through a legal strike just to be treated fairly in the workplace. These contract negotiations should have been settled years ago, and in industries not governed by the Railway Labor Act, they more than likely would have been. The economic power of a legal strike is never to be abused or taken lightly, but the mere fact that it exists in other industries often compels those employers to negotiate fair contracts.

It is obvious that the rail carriers are not similarly compelled; they count on and hide behind the provisions of the Railway Labor Act to save them from having to treat their employees fairly. An industry that generally hates government involvement now seeks just that by lobbying shippers and government seeking their intervention.

In the end, the question of whether or not any of the rail industry’s Union-represented employees want to legally strike is secondary to what they truly want. They want a contract with meaningful wage increases and good benefits. They want jobs that give them the ability to have a life outside of work. To be clear, there would be no need for a strike vote if any of that had happened in these negotiations. The responsibility for the rail industry and our Union even being in this situation lies squarely on the rail carriers. They created the mess, and they have the power and financial means to fix it. It is sad that we may have to collectively go to the federal government to accomplish that, but rest assured that our Brotherhood is now prepared to take the next steps in the process, as we fight to reach a contract settlement that our membership will accept.