In the Line of Duty: Ryan M. Jones 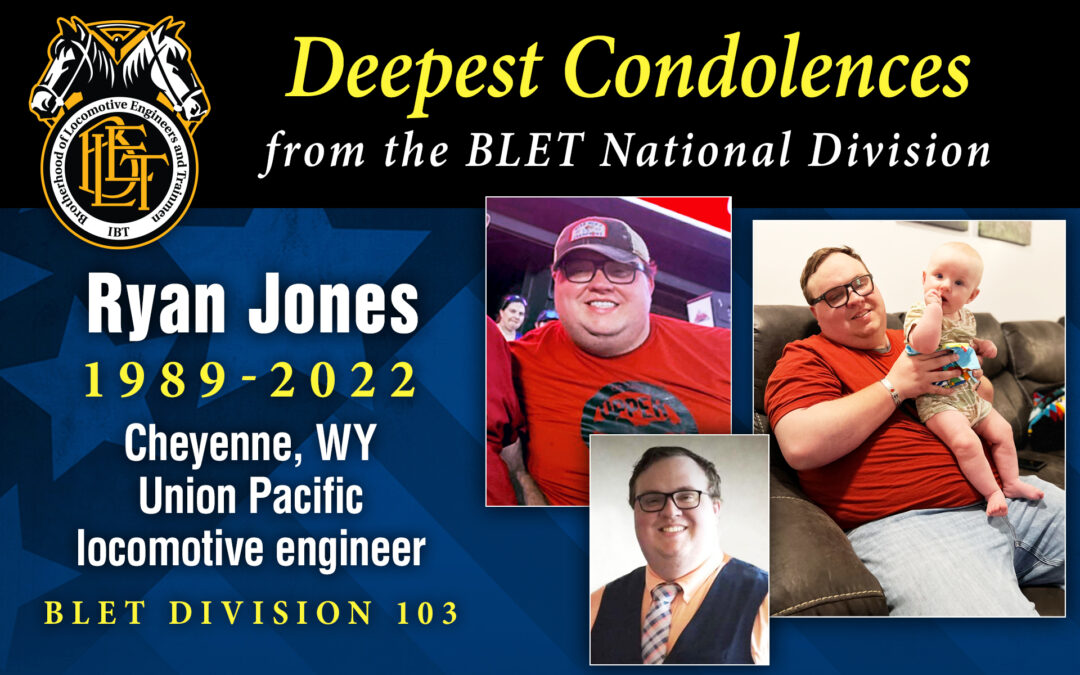 Brother Jones hired out with the Union Pacific Railroad in July of 2014 as a conductor out of Green River, Wyoming, until he had adequate seniority to work at Cheyenne. He was promoted to locomotive engineer in August 2018. Brother Jones had recently joined the BLET and was excited and proud about his new membership.

On the evening of July 28, 2022, Brother Jones had just finished untying a coal train at Hanna, Wyoming, when he suffered a major cardiac event. He is survived by his father, Michael, his sister, Jessica (Jones) Toman, her husband Christopher Toman, and their infant son, Decker, who was the joy of Ryan’s life.

Prior to his railroad career, Brother Jones received his Bachelor of Arts degree in Hotel and Resort Management from Metropolitan State University, and worked for Marriott in Denver for several years. In his free time, Brother Jones enjoyed fishing and exploring the mountains of Colorado, especially in his “hometown” of Marble,  Colorado. Coworkers will remember Brother Jones for his generosity, his sense of humor, and his frequent smile.

A celebration of life will be held on Friday, August 12, 2022, at 10:00 a.m. at the Howe Mortuary Chapel located at 439 Coffman Street, Longmont, Colorado. A reception will follow at Sandstone Park in Longmont.

“On behalf of the BLET National Division, and all men and women of our Brotherhood, I extend deepest condolences to the family and friends of Brother Jones,” BLET National President Dennis R. Pierce said.