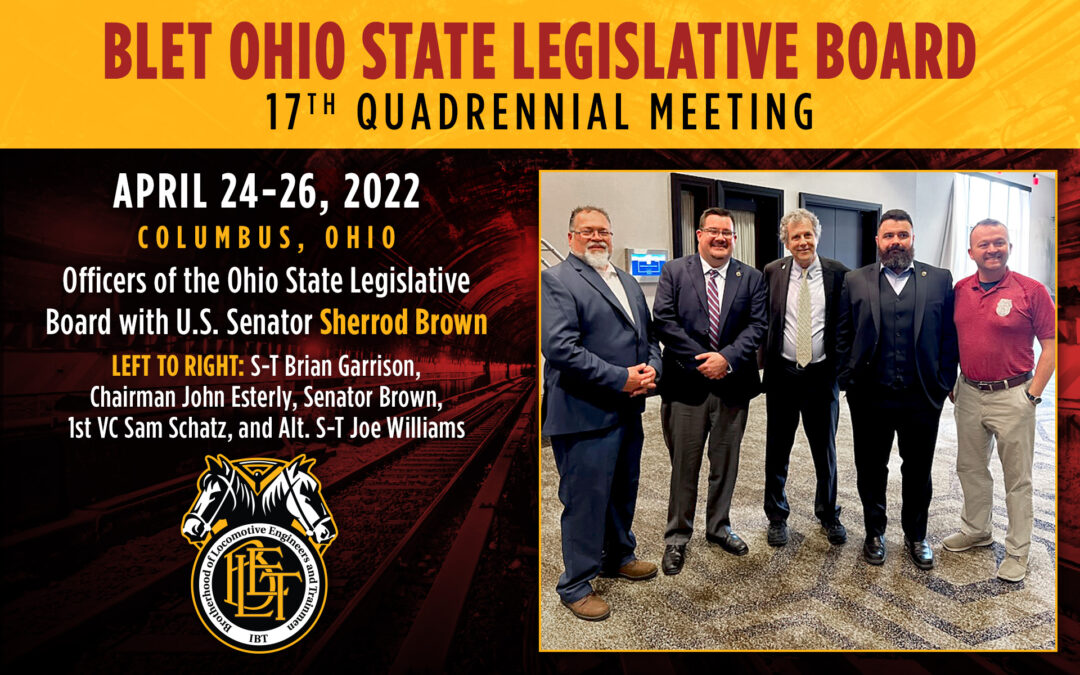 INDEPENDENCE, Ohio, May 18 — John S. Esterly of BLET Division 34 (Columbus, Ohio) was elected to his first full term as Chairman of the Ohio State Legislative Board at its 17th quadrennial meeting held in Columbus, Ohio, April 24-26, 2022.

United States Senator Sherrod Brown (D-OH) was a special guest and he addressed the delegates on April 25. It was clear from Senator Brown’s remarks and his active exchanges with the BLET members present that the Senator stands in support of rail labor’s issues.

A CSX locomotive engineer, Brother Esterly is a member of Division 34 in Columbus, Ohio. He hired out with CSX in 2011 and earned promotion to locomotive engineer in 2015. Brother Esterly joined BLET Division 34 on April 1, 2014, and has held elected office in the BLET ever since. He began serving Division 34 as the Trainmen’s Local Chairman until he was elevated to Ohio State Legislative Board Chairman in March of 2021. He also served as Division 34’s Legislative Representative and a Division Trustee between 2015 and 2021.

President Pierce addressed the group, updating the membership on the ongoing battle with the nation’s rail carriers to secure a new national contract and relief from draconian attendance policies.

“Congratulations and thank you to Brother Esterly and all officers of the Ohio State Legislative Board,” President Pierce said. “It speaks volumes about the influence of the Board to have a sitting United States Senator attend their quadrennial meeting. I am confident they will continue doing an excellent job of representing our Brothers and Sisters in the proud Buckeye state.”

Representatives from the Railroad Retirement Board-Office of the Labor Member were in attendance, along with Federal Railroad Administration (FRA) Drug and Alcohol and Motive Power and Equipment inspectors.

The Board voted unanimously to dedicate the quadrennial meeting to Chairman Emeritus Timothy T. Price, who served as chairman from 2015-2021.

The Ohio State Legislative Board represents more than 2,400 active and retired members from 22 different BLET Divisions.