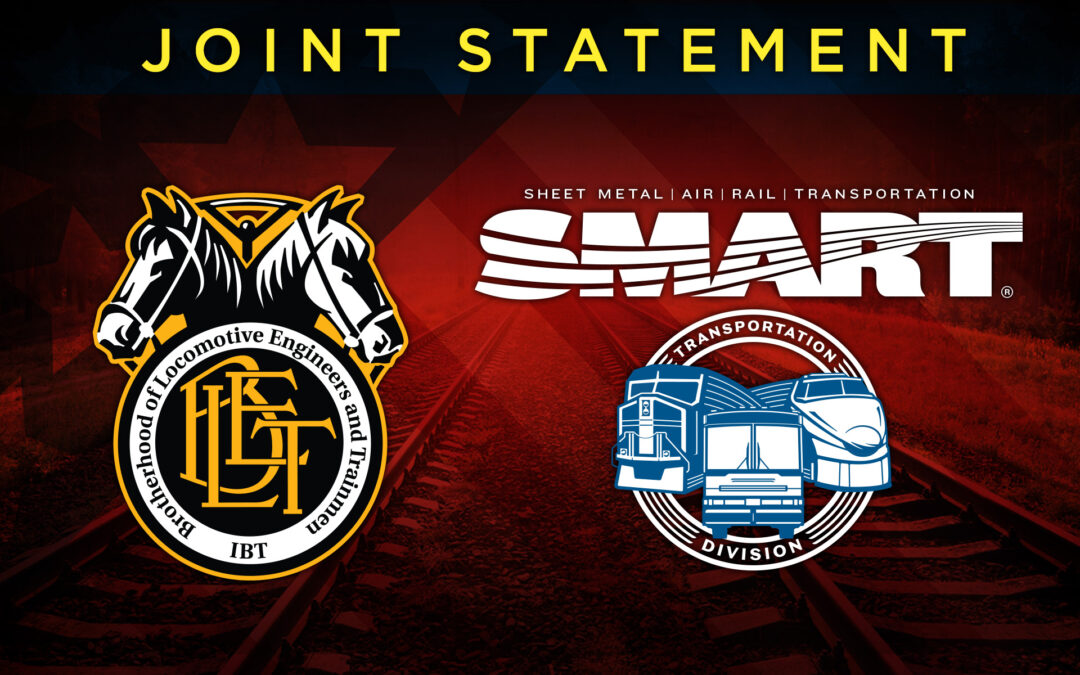 Members of the Brotherhood of Locomotive Engineers and Trainmen vote to ratify national rail agreement with the nation’s Class I railroads; operating craft (Train & Engine service) members of the Transportation Division of the International Association of Sheet Metal, Air, Rail, and Transportation Workers have voted to reject it, while non-operating craft members (Yardmasters) have voted to ratify their national agreement.

INDEPENDENCE, Ohio — Voting concluded midnight Sunday for members of the Brotherhood of Locomotive Engineers and Trainmen as well as the Transportation Division of the International Association of Sheet Metal, Air, Rail, and Transportation Workers on proposed new five-year collective bargaining agreements with the nation’s Class I railroads. BLET members voted to accept a tentative agreement reached on September 15; SMART-TD train and engine service members have voted to reject their proposed contract, while SMART-TD yardmaster members voted to accept. BLET and SMART-TD are the two largest rail unions, accounting for half of the unionized workforce on the nation’s largest freight railroads.

The five-year agreement ratified by BLET members and SMART TD yardmaster members addresses rates of pay, health & welfare, and other fringe benefits for approximately 24,000 locomotive engineers and other rail workers represented by the union who are employed by the nation’s Class I railroads.

A record number of eligible BLET members participated in the ratification vote with 53.5% voting in favor and 46.5% voting against.

Turnout among the more than 28,000 eligible SMART-TD members was also a record high. 50.87% of train and engine service members represented by SMART-TD voted to reject the TA, while 62.48% of SMART-TD represented Yardmasters voted to ratify.  Representatives from SMART-TD will now head back to the bargaining table with the National Carriers Conference Committee (NCCC), which represents railroad management, to negotiate new terms for the affected train and engine service members.

“BLET is a membership-driven union.  In September, our National Wage Committee and our General Chairmen who represent freight rail workers unanimously agreed that the time had come for the membership to have a say on their contract,” said BLET President Dennis Pierce.  “Since then, we have worked to ensure that all of our members fully understand the wins and losses in the Presidential Emergency Board recommendations and how those recommendations were improved upon leading to the tentative agreement sent out for their consideration. In every communication we stressed that we were there to explain the tentative agreement, not to tell any member how to vote. Our goal was to get all involved members to cast a ballot — no matter how they voted.  With over two-thirds of eligible BLET members returning a ballot, a true majority of the membership has spoken and I want to thank them all for participating.  Rank and file member ratification of contracts is one of the core democratic principles of our Union.”

Under the provisions of the Railway Labor Act, the labor law for workers employed by railroads and airlines, contracts don’t generally expire, they become amendable. After the unions filed their Section 6 notices with the NCCC in November 2019, talks began in January 2020.

“SMART-TD members with their votes have spoken, it’s now back to the bargaining table for our operating craft members,” said SMART-TD President Jeremy Ferguson. “This can all be settled through negotiations and without a strike. A settlement would be in the best interests of the workers, the railroads, shippers and the American people.”

A status quo agreement between SMART TD and management is in effect until December 8. Beginning on December 9, SMART-TD would be allowed to go on strike or the rail carriers would be permitted to lock out workers — unless Congress intervenes.

“The ball is now in the railroads’ court. Let’s see what they do. They can settle this at the bargaining table,” said Ferguson. “But, the railroad executives who constantly complain about government interference and regularly bad-mouth regulators and Congress now want Congress to do the bargaining for them.”

“We stood shoulder to shoulder with our brothers and sisters in SMART-TD and others in rail labor throughout this process, and we will continue to stand in solidarity with them as we approach the finish line in this round of negotiations,” said Pierce.

The Brotherhood of Locomotive Engineers and Trainmen represents nearly 57,000 professional locomotive engineers and trainmen throughout the United States. The BLET is the founding member of the Rail Conference, International Brotherhood of Teamsters. More information can be found on the BLET website:  https://ble-t.org

The SMART Transportation Division is comprised of approximately 125,000 active and retired members of the former United Transportation Union, who work in a variety of crafts in the transportation industry. Find out more at the SMART-TD site: https://smart-union.org .