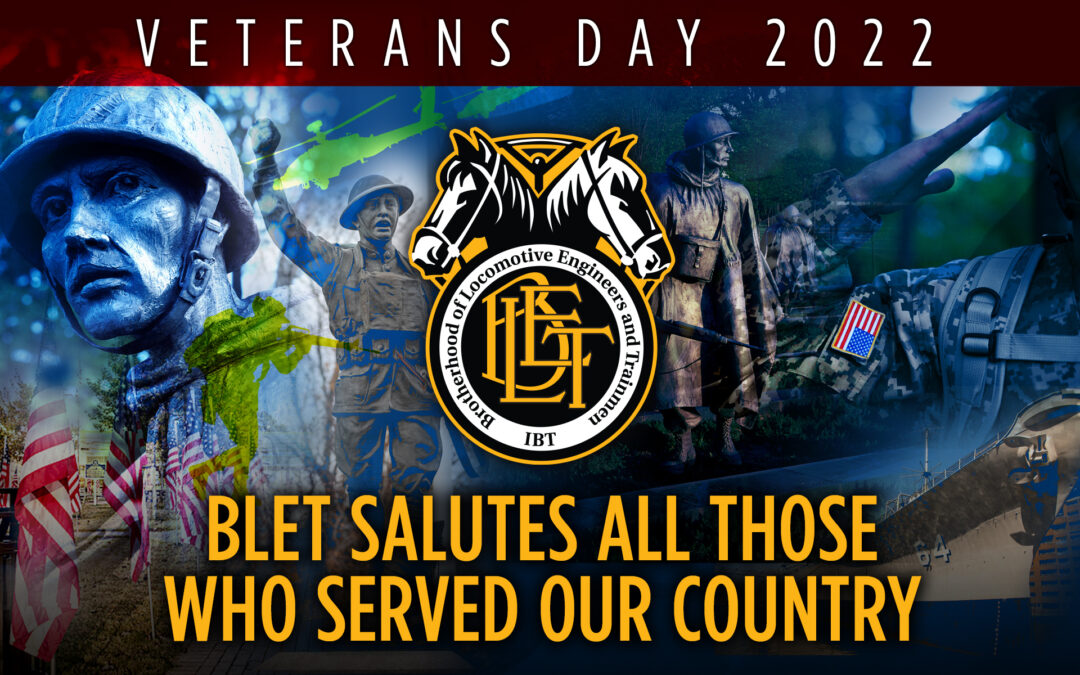 INDEPENDENCE, Ohio, November 11 — On Veterans Day, the Brotherhood of Locomotive Engineers and Trainmen wants all of our veterans to know how grateful we are for your service to our Nation. We thank you for your contributions and sacrifices, which have made our country free and strong.

Veterans Day was first celebrated in 1938, known as Armistice Day. Armistice Day was primarily instituted to honor veterans of World War I. After World War II, which required the greatest mobilization of soldiers, sailors, marines, and airmen in the Nation’s history, and after American forces had fought aggression in Korea, the 83rd Congress changed the name of the holiday by replacing the word “Armistice” with the word “Veterans.” This was done at the urging of veterans’ service organizations in order to include veterans who served in all American wars. With the approval of this legislation (Public Law 83-380) on June 1, 1954, November 11th became a day to honor American veterans of all past and future wars.

Veterans Day is an important day of remembrance for our members. Our Brotherhood was founded on May 8, 1863, and many of our Organization’s original members were veterans who fought in the Civil War. Today, our members carry on that proud tradition of service to America’s military heritage.

Our way of life and the freedoms we enjoy are largely due to our veterans. One of our most important freedoms is the right to vote in free and fair elections, and Americans exercised that right earlier this week. If you voted on November 8, you should thank a veteran on November 11.

Behind every soldier who serves is a family who also serves, and they are also deserving of our respect and gratitude. On behalf of the entire BLET Advisory and our 57,500 active and retired members, we thank all veterans for your service and the sacrifices made by you and your families. Please join me in honoring America’s veterans with the dignity and respect they so richly deserve.