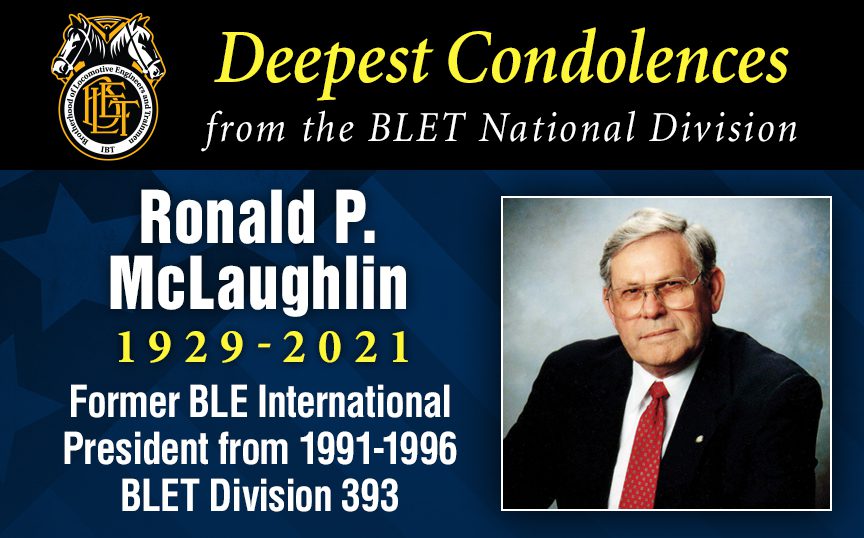 INDEPENDENCE, Ohio, November 17 — Former BLE International President Ronald P. McLaughlin passed away peacefully in his sleep at the age of 92 on November 12, 2021. He served in the union’s highest office from 1991-1996.

President McLaughlin was a member of our Brotherhood for 71 years, having joined BLET Division 393 on January 1, 1950.

After serving in the U.S. Marine Corps in San Diego, California (1946-1948), President McLaughlin began his railroad career as a fireman on the Chicago, Milwaukee, St. Paul & Pacific Railroad (The Milwaukee Road) on October 16, 1948. He earned promotion to locomotive engineer on October 20, 1952.

Brother McLaughlin was elected to the Brotherhood’s highest office on August 22, 1991, during the BLE’s Fifth Quinquennial Convention. During his five-year term of office, President McLaughlin testified before Congress multiple times to advocate for improved railroad safety laws to protect the lives of BLE members. Brother McLaughlin also had several White House-level meetings during his tenure as BLE Chief, and met with President Bill Clinton on more than one occasion. President McLaughlin led one round of national contract negotiations, which concluded when a new agreement that was ratified in 1996. President McLaughlin retired in 1996, shortly after ratification of the national contract and following the union’s Sixth Quinquennial Convention in Detroit, Michigan.

During the 1950s, President McLaughlin played semi-professional baseball as an outfielder. He received offers from the Yankees and Red Sox to join their entry-level farm teams, but declined, in part, because he did not want to give up his railroad career. He remained a good athlete throughout his life, and was a very capable and enthusiastic golfer into his 80s.

President McLaughlin followed in the footsteps of his father, J. H. McLaughlin, who served as General Chairman of the Milwaukee Road General Committee of Adjustment from 1951-1966. Both men were noted for their skill in negotiations.

“On behalf of all men and women of the BLET, I extend our most heartfelt condolences to Barbara and the entire McLaughlin family,” President Pierce said. “Countless members have benefitted from Brother Ron’s dedication as a union officer for more than four decades. President Ron McLaughlin left a lasting impact on our Brotherhood and we are a better organization today because of his leadership.

The family will host a private celebration of life for President McLaughlin on Saturday, November 20. In lieu of flowers, the family asks that donations be made to the American Cancer Society.