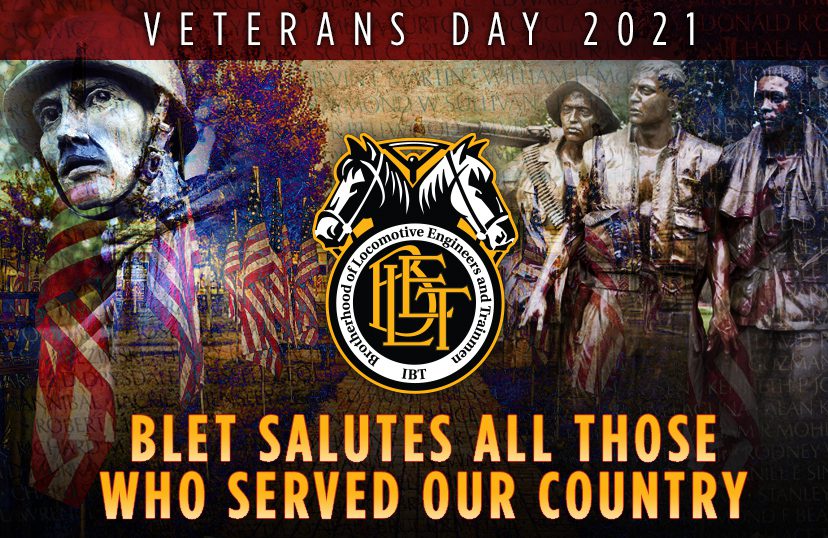 INDEPENDENCE, Ohio, November 11 — On this Veterans Day, we are proud and humbled to honor our veterans and pay tribute to their sacrifices that have made our country free and strong.

Veterans Day is an important day of remembrance for the BLET and our members. Our Organization was founded on May 8, 1863, during the midst of the Civil War. Many of our Organization’s original members were veterans, having fought in the Civil War. Over the years, BLET members have proudly continued the tradition of service to America’s military heritage.

Veterans Day was first celebrated in 1938 when it was known as Armistice Day. Armistice Day was primarily instituted to honor veterans of World War I. After World War II, which required the greatest mobilization of soldiers, sailors, marines and airmen in the Nation’s history, and after American forces had fought aggression in Korea, the 83rd Congress changed the name of the holiday by replacing the word “Armistice” with the word “Veterans.” This was done at the urging of veterans’ service organizations in order to include veterans who served in all American wars. With the approval of this legislation (Public Law 83-380) on June 1, 1954, November 11th became a day to honor American veterans of all past and future wars.

We are grateful for the sacrifices our veterans have made — and continue to make — on our behalf. And let us not forget that behind every veteran who serves is a family who also serves. We are grateful to those families who must somehow carry on with their normal lives while their loved ones are performing their dangerous duties overseas.Please join me in honoring all of America’s veterans with the dignity and respect they so richly deserve.